PHOTOGRAPHS of the GATEHOUSE

and below, further photographs of the

WATERFRONT and the SURROUNDING AREA 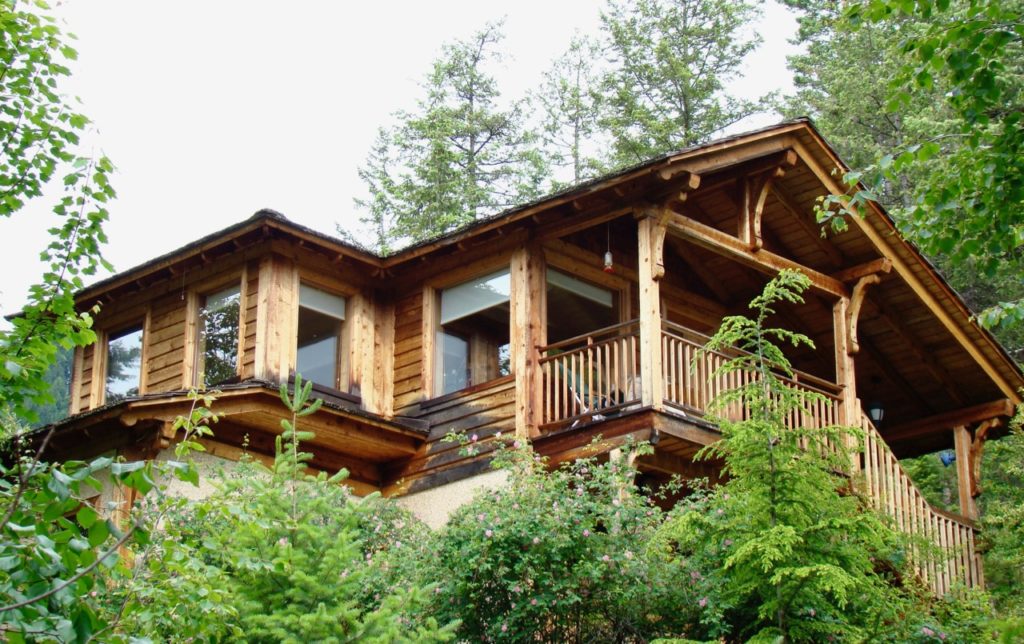 The Gatehouse-on-the-Point seen from below, looking northwest. 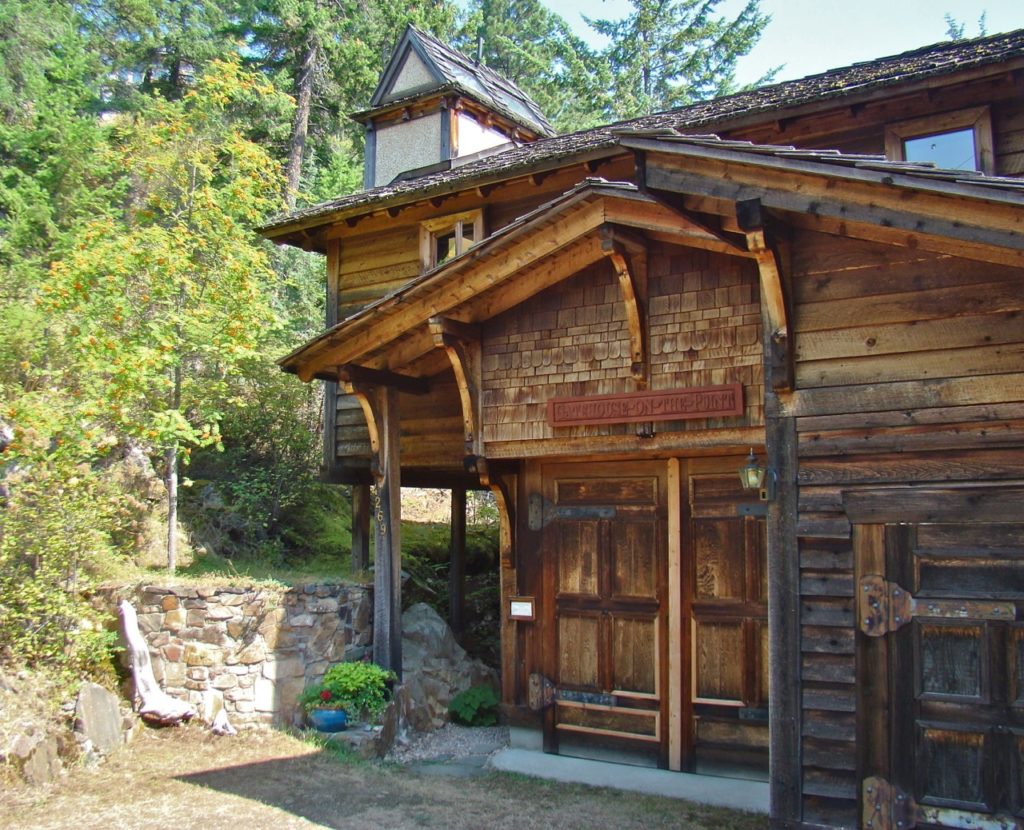 On arrival at the road’s end, the Gatehouse is the only structure you will see. 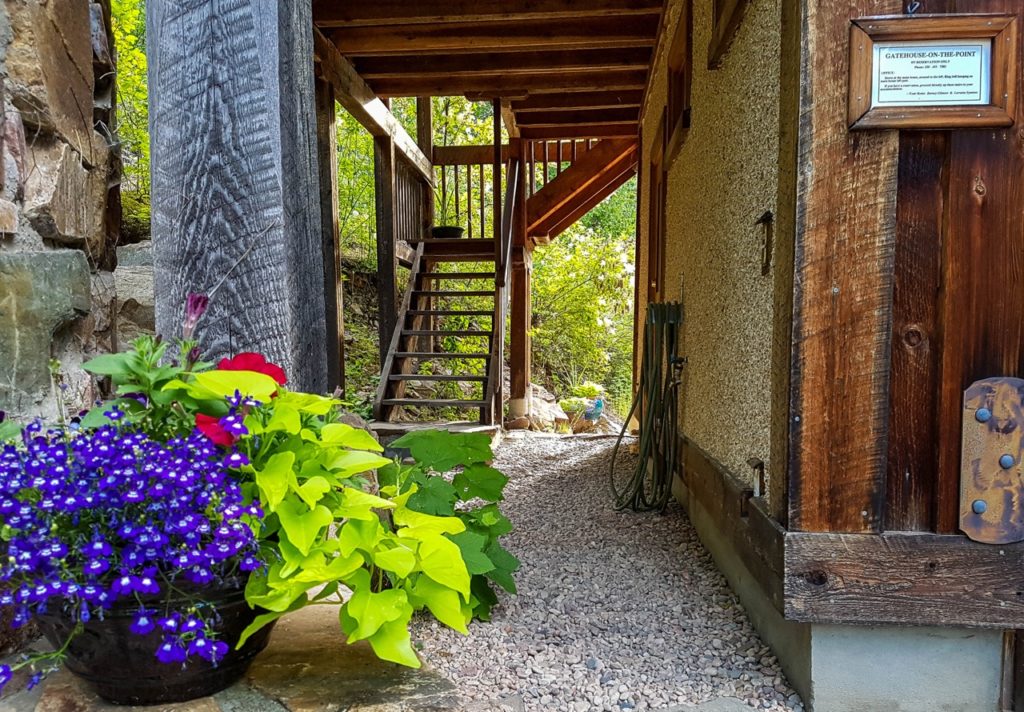 This passageway under the Gatehouse leads to the stairs up to front porch. 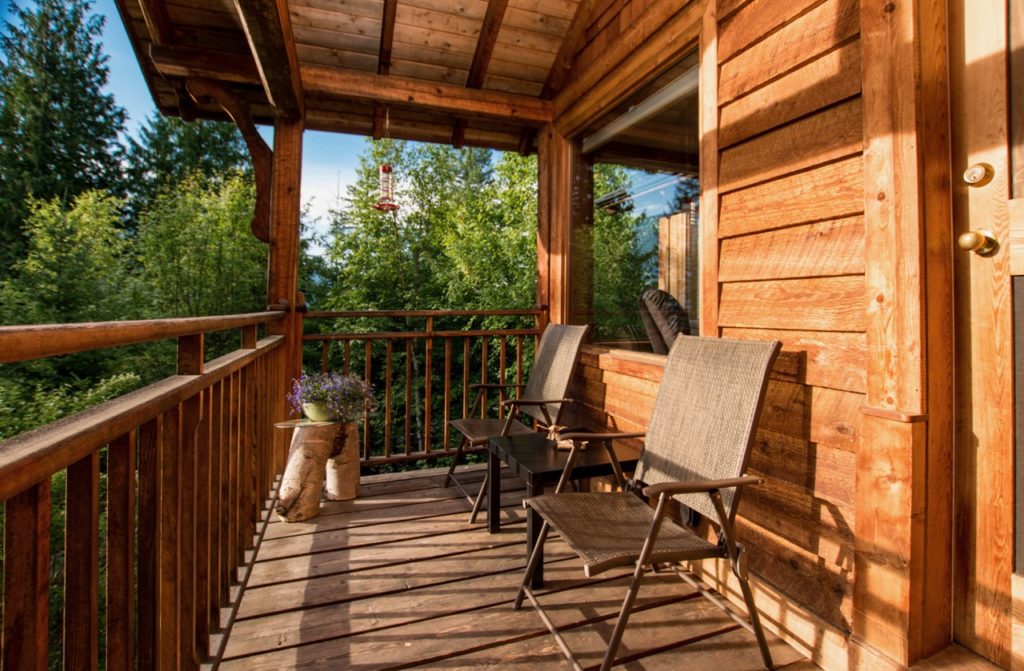 Stepping on to the front porch this is the view south. The front door is at your right. 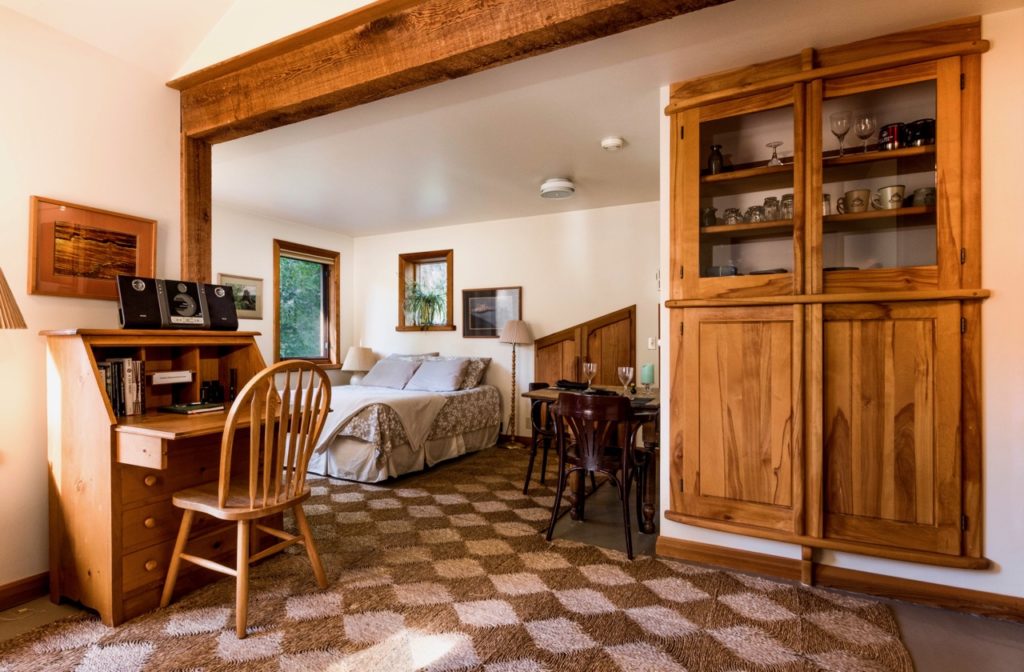 Opening the door and stepping inside, this is the view southwest and into the sleeping alcove. 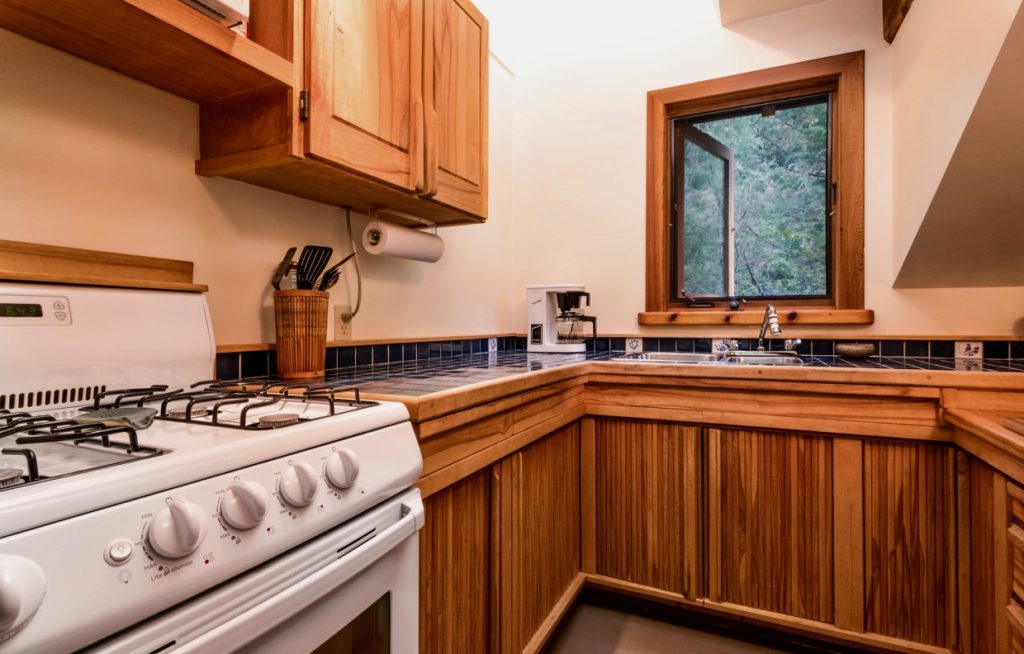 As you enter, the kitchen is immediately to your right. This shows a detail of the kitchen and its lightwell over the kitchen sink. 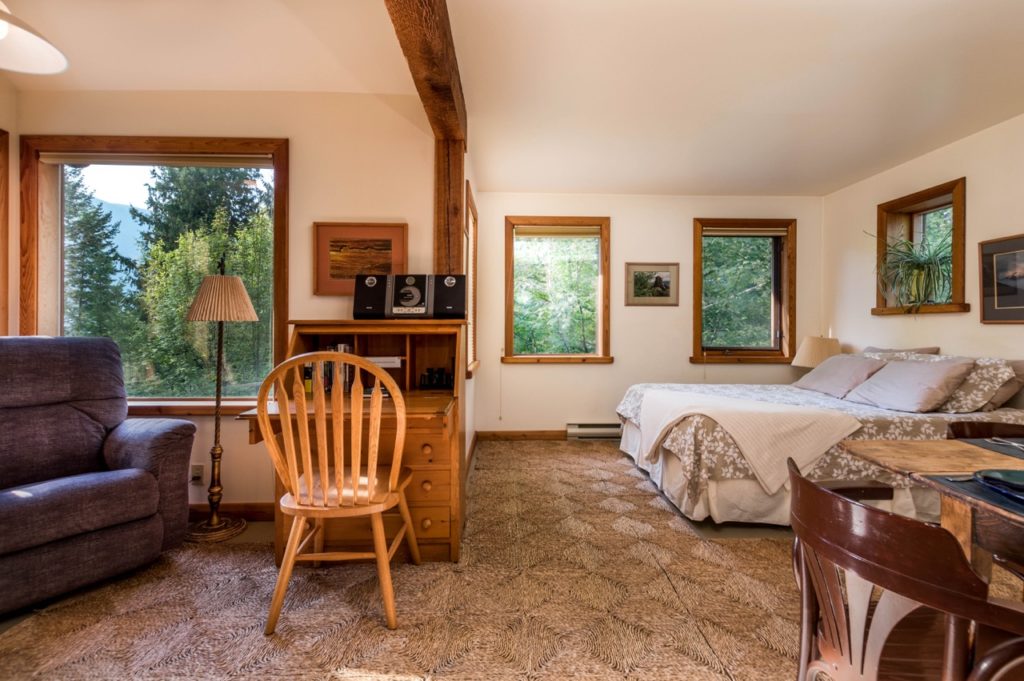 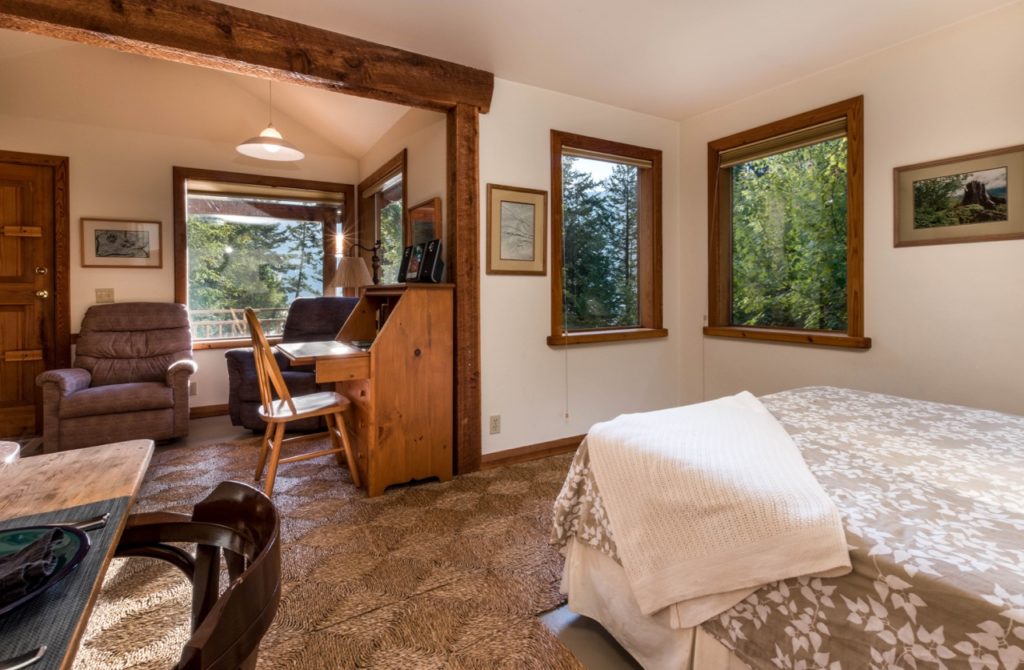 The full view into the sitting alcove is shown here, with the front door in the background and the dining table and bed in the foreground. 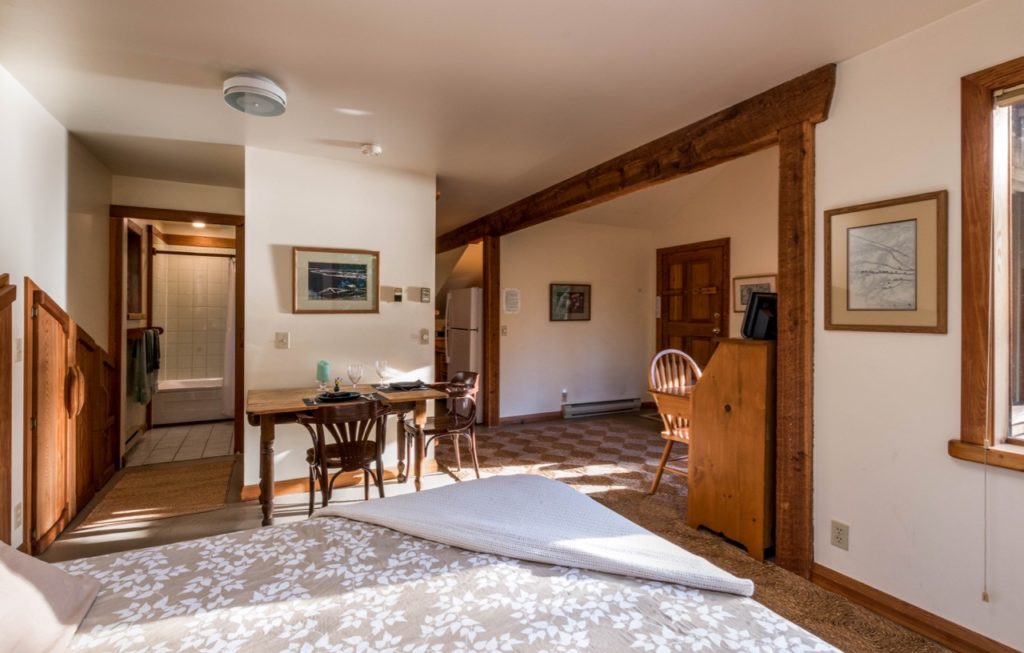 This view northeast shows the entrances to the bathroom on the left and the kitchen on the right. The dining table is seen in the centre. 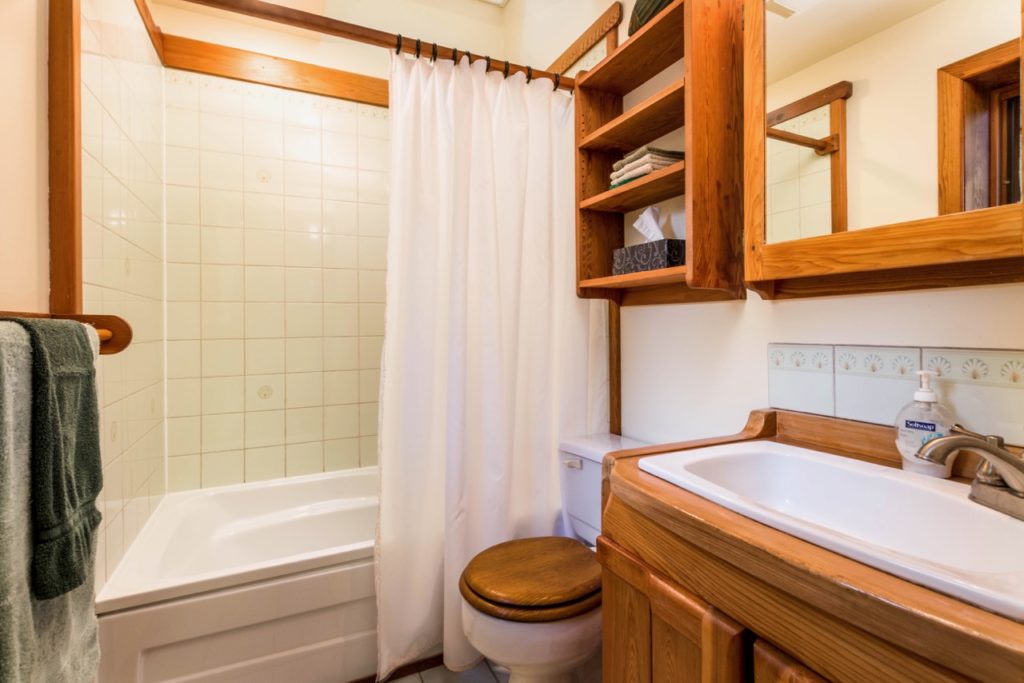 This photograph, taken standing beside the bathroom door, shows the shower and the bottom of the lightwell above it. The reflection seen in the bathroom mirror at the right shows the top of the small window above the towels. 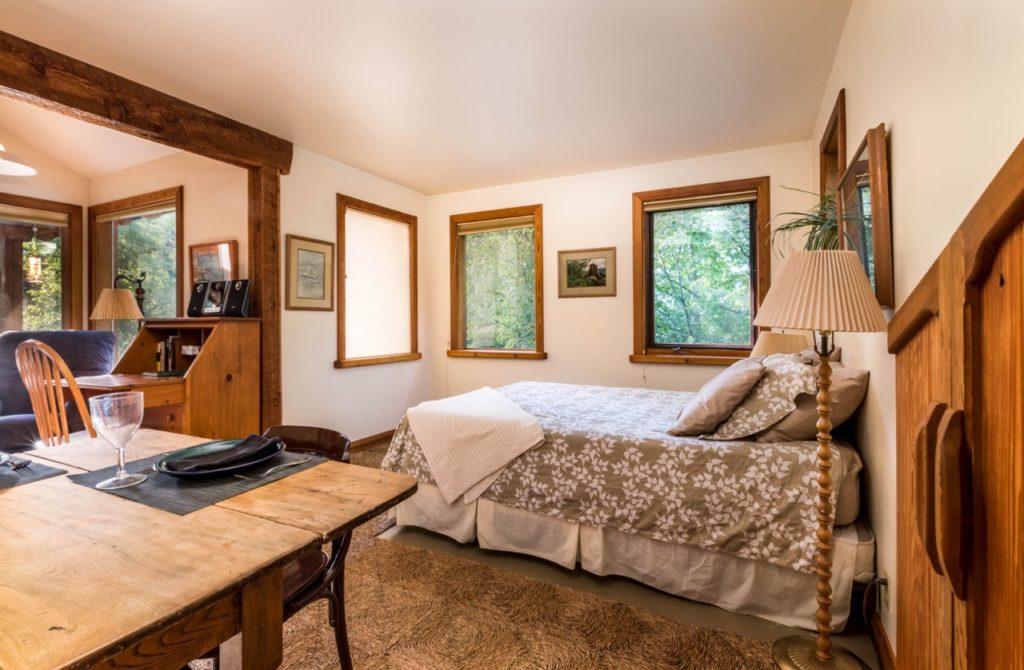 Leaving the bathroom this is the view of the sleeping alcove. 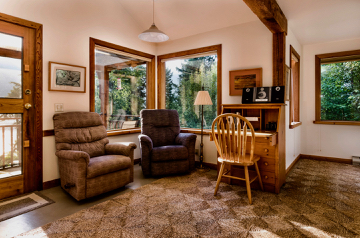 From the sitting alcove these windows offer a view east across the lake to the Purcell mountains. 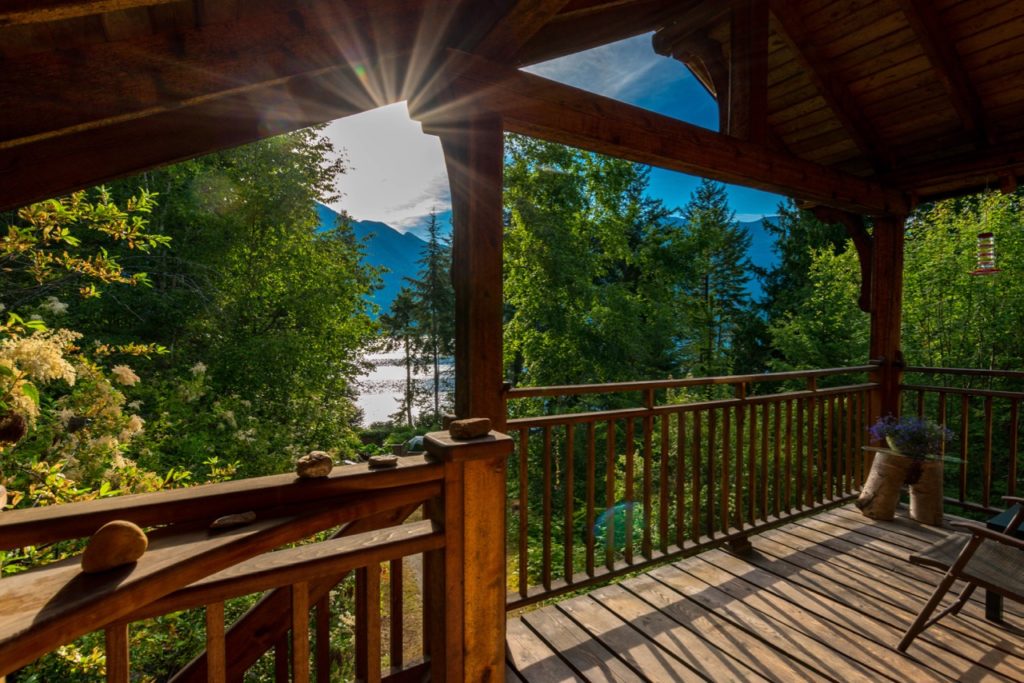 And from the kitchen window, this is the view southeast over the front porch.

PHOTOGRAPHS OF THE STAIRS TO THE LAKESHORE 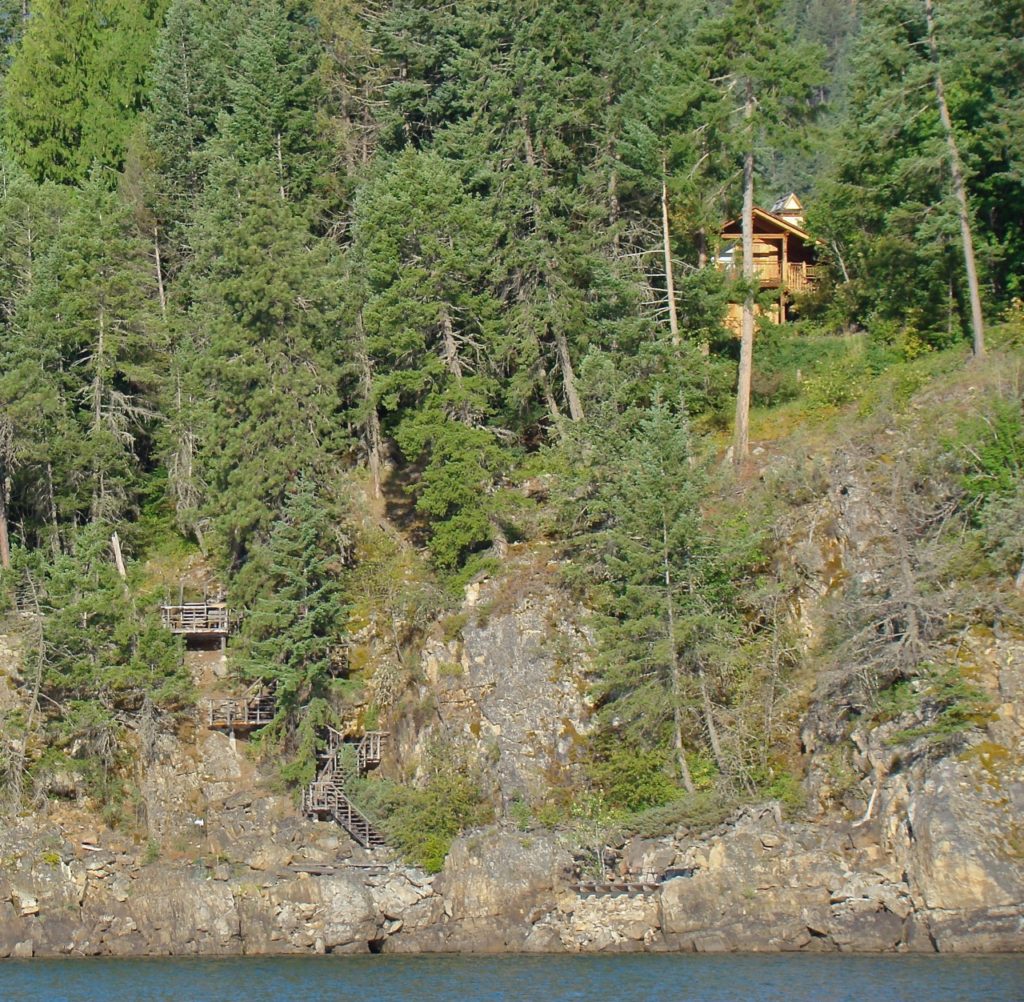 A peek at the Gatehouse seen from a boat off Woodbury Point. Four of the seven platforms on the stairs down to the lake are visible at the lower left. At the bottom centre the waterfront deck can just be seen, edge-on. 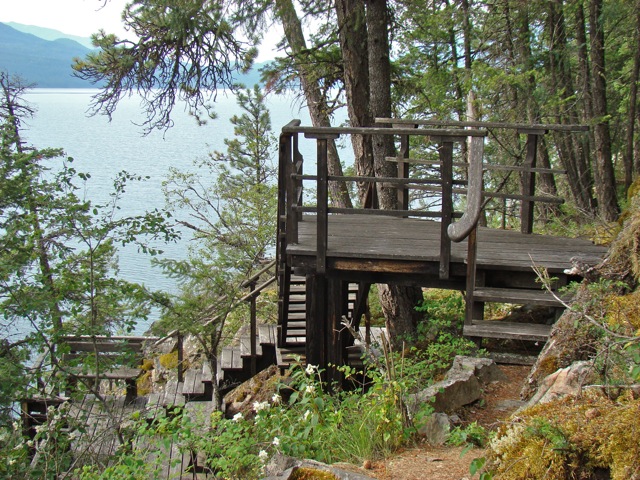 Here is the path to the start of the stairs leading down to the waterfront deck. 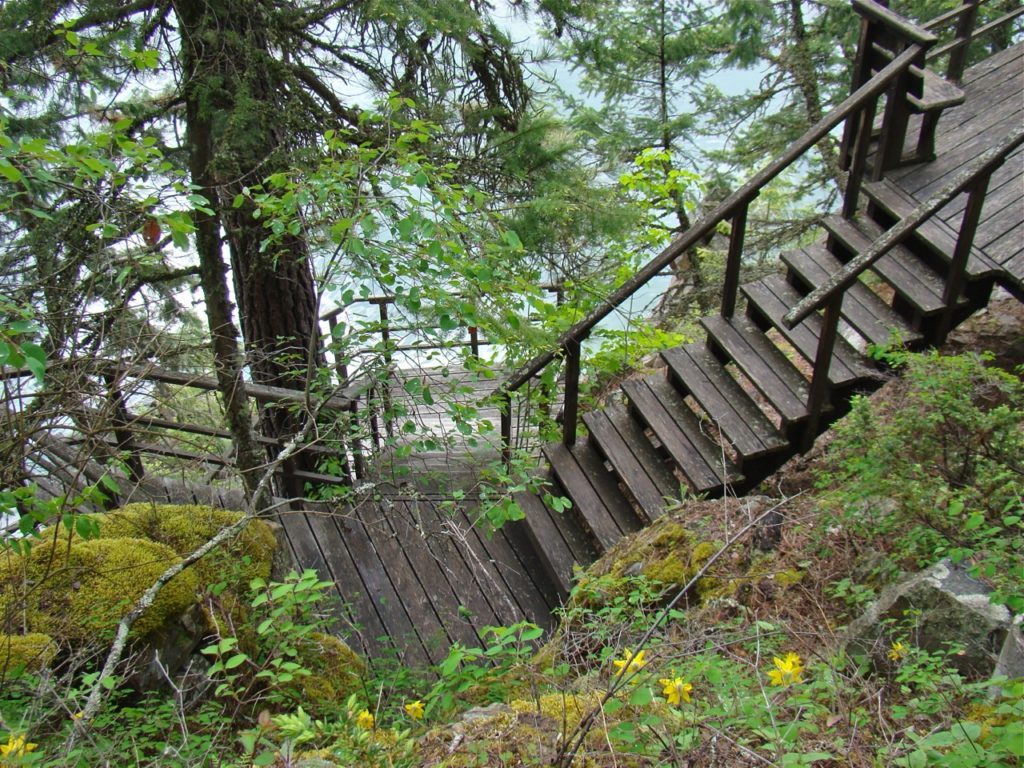 Looking down the stairs from the first platform at the third and fourth platforms, in spring. 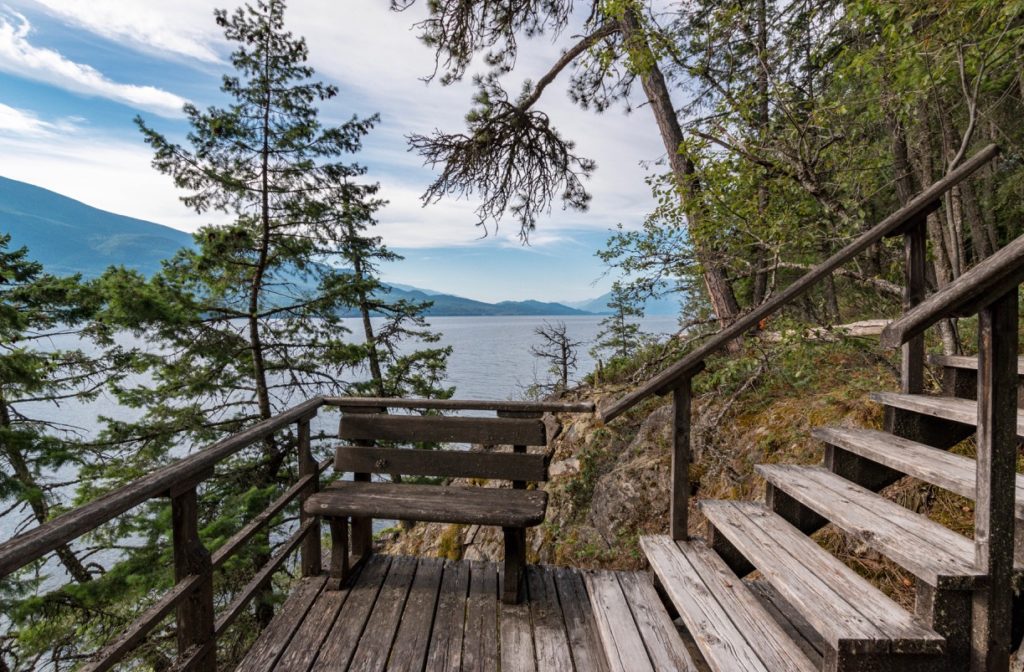 A view South looking over the rest stop on the third platform. 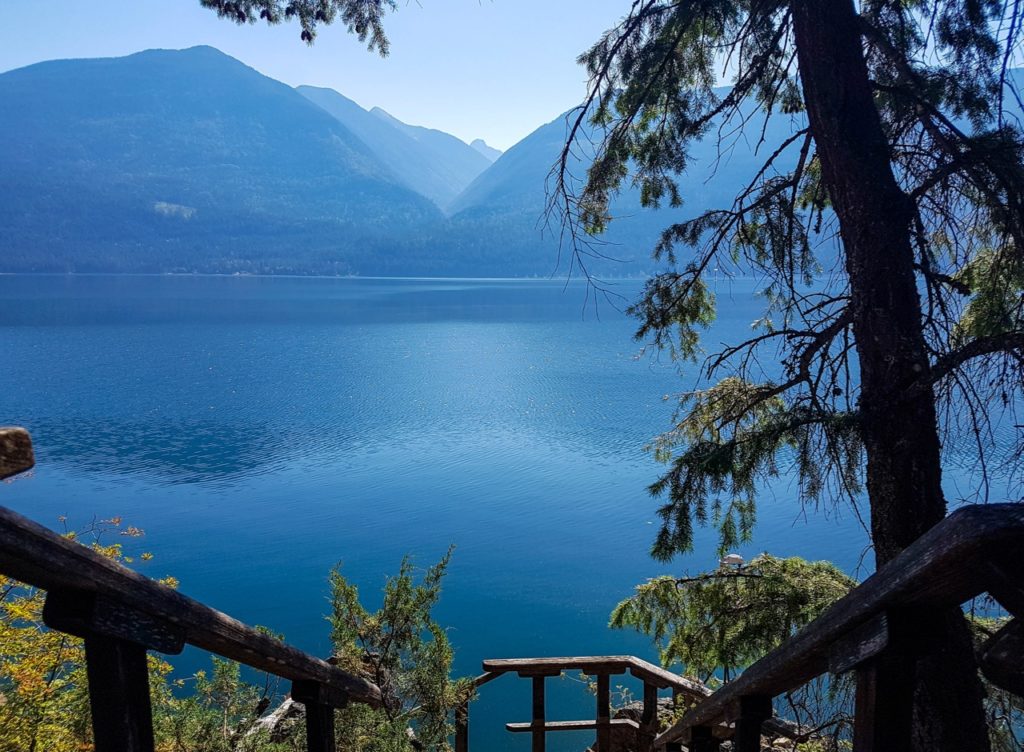 The view East over the lake approaching the seventh and final platform. 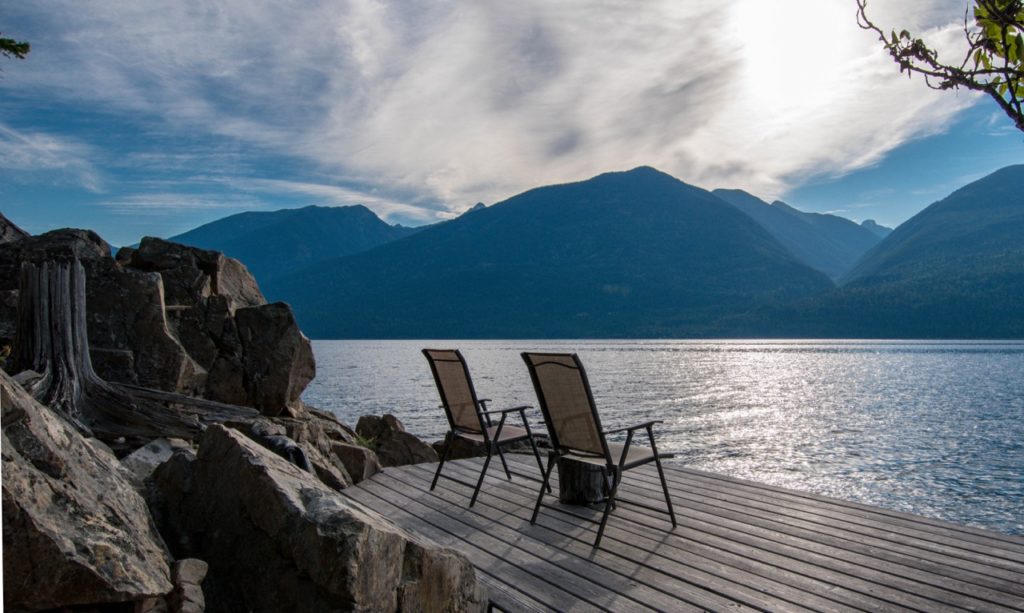 On arrival at the waterfront deck, looking northeast. This deck is out of sight from all local buildings and offers complete privacy. 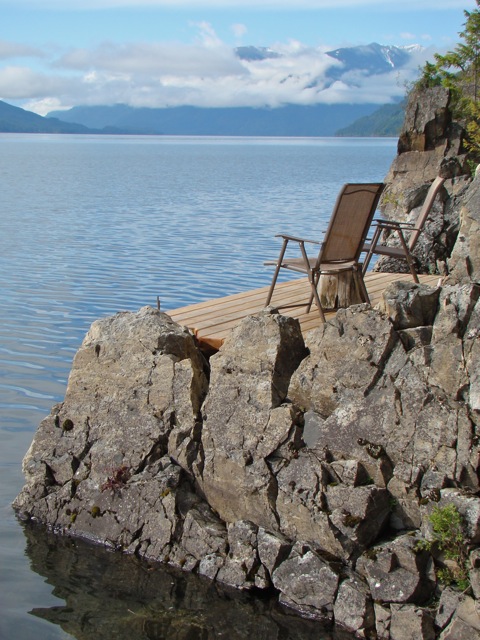 A view south over the waterfront deck.

And from the waterfront deck at sunset here is a long view south. The cool and quiet and peace of the Kootenays will call you back to this deck frequently.

The Gatehouse is located on the eastern tip of Woodbury Point, a peninsula that juts out into Kootenay Lake from the Selkirk mountains that form the west shore of the lake. Kaslo is the nearest large town, and it is the centre of local activity. 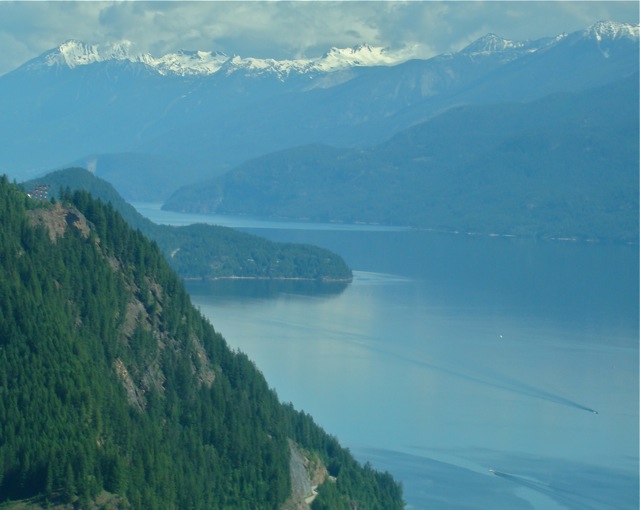 This is an aerial view of Woodbury Point, with its distinctive hump behind it. Highway 31, running north from Balfour, B.C., can just be seen in the centre of the photo, at the bottom. The Gatehouse is located on the right hand tip of this peninsula.

Woodbury Point is seen here from the ferry across Kootenay Lake. The ferry travels between Kootenay Bay on the east shore, and Balfour, B.C. on the west shore. 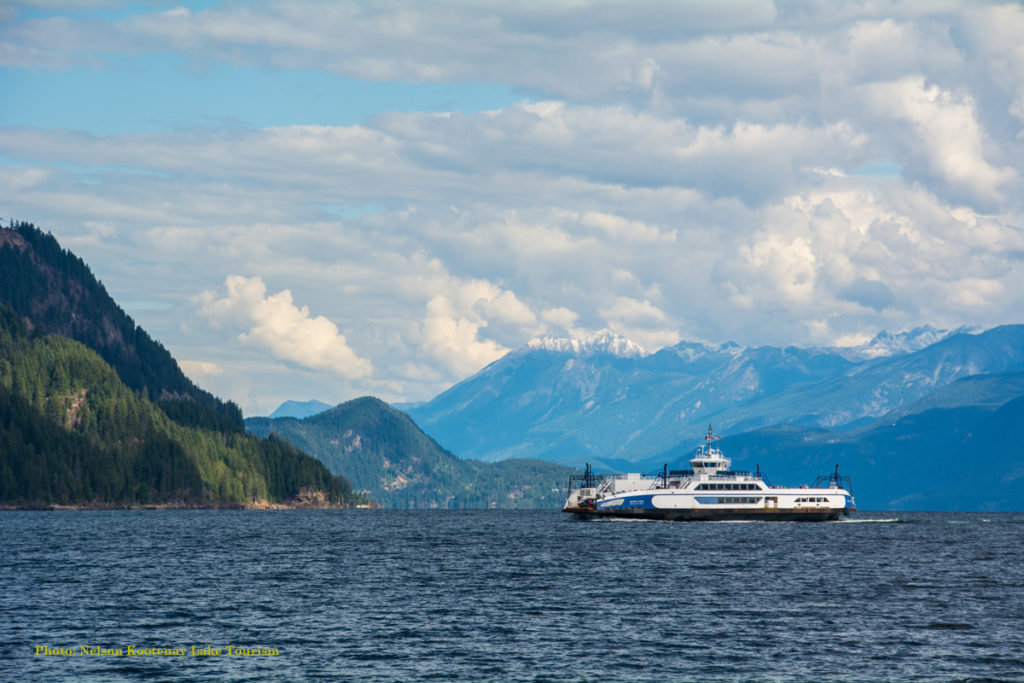 The Osprey 2000 serves on the LONGEST FREE ferry route in the world, and it is shown here heading toward Balfour, with Woodbury Point in the distant background.

Driving north to Kaslo from the Gatehouse, this is a springtime view up the lake seen from the highway. 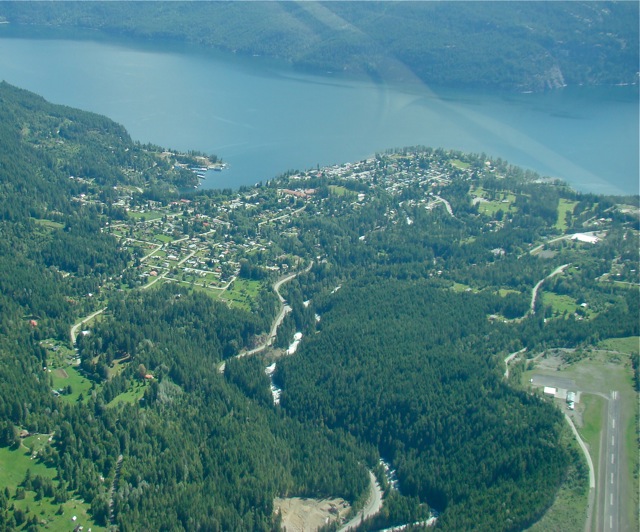 This is an aerial photo of Kaslo taken in early June. The Kaslo River can be seen winding down from the mountains, beside the highway that comes east from New Denver, B.C. The Kaslo airstrip can be seen at the lower right, and above it, nearer the lake, is the Kaslo Golf Course. Kaslo Bay is visible near the top left of this photo. 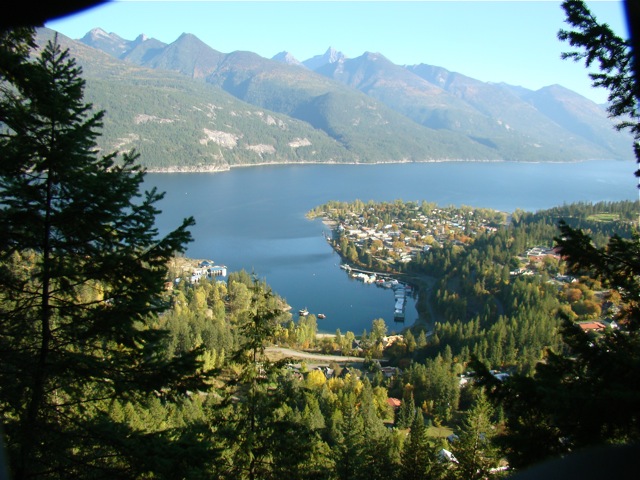 This autumn view of Kaslo, looking southeast from the Wardner trail above town, shows Kaslo Bay and the main downtown area adjacent to the bay on the south side. A glimpse of the golf course can just be seen on the high ground above town at the centre right of this photograph. 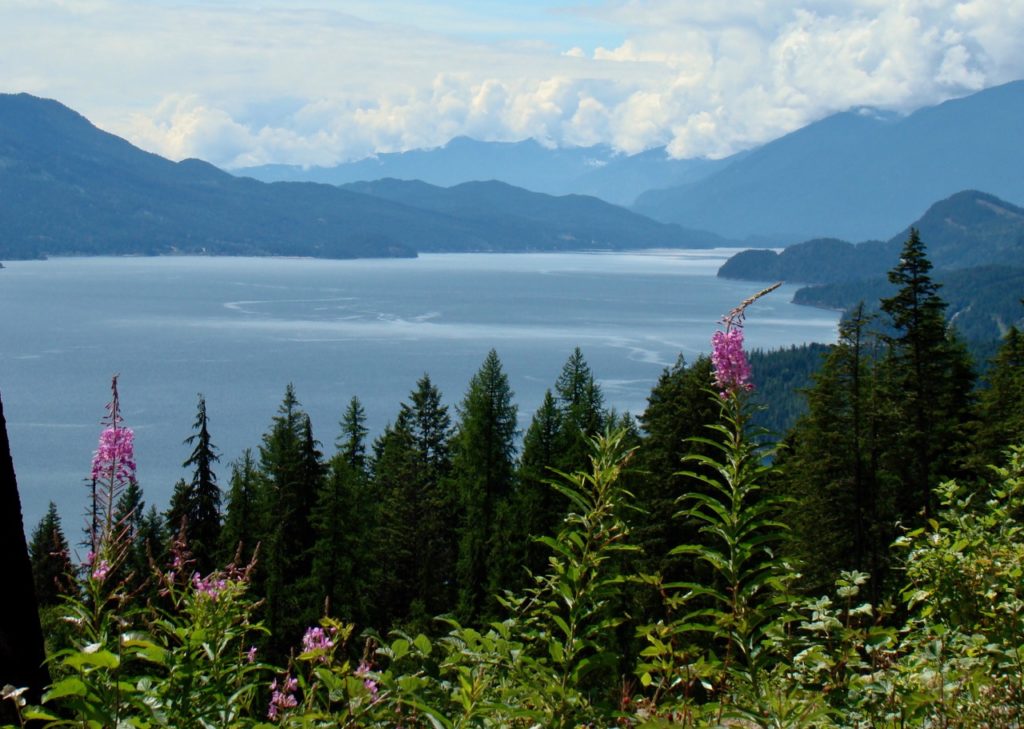 In this view looking south from just north of Kaslo, Woodbury Point can be seen in the distance above the fireweed blossom.

And finally, here is a panoramic view of Woodbury Point, showing the Selkirk range from South to North